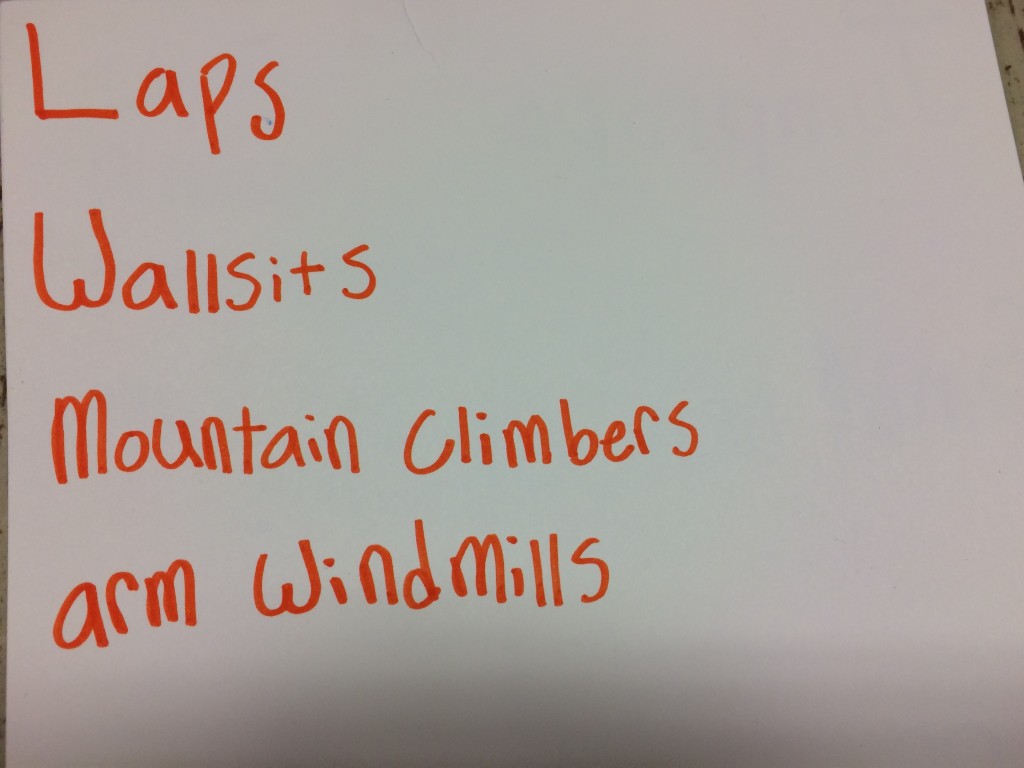 I have some fitness testing coming up for my 5th and 6th grade classes.  I wanted to do something today to give them a good workout and help them prepare.  This lesson turned out great!

I have my classes divided into 4 groups of 7-8 students.  (read about my method here).  I had the students sit in their groups and assigned them each to write a fitness circuit.  Their circuit was to have 2 cardio and 2 strength activities.  We talked about what the word cardio means and some examples of both kinds of activities.  The circuit was to rotate in a cardio-strength-cardio-strength sequence.  They did not have to assign a number of reps because we would be timing the rotations for 1 minute.  I also told them that if they wanted equipment for their exercises I would get it out for them (jump ropes, yoga balls, etc).  I gave them half sheets of cardstock, a marker, and a cone to attach it to when done.

Once the circuits were written, groups began with their own.  I played music that paused every minute which signaled them to move on to the next exercise.  When they had finished their four exercises they moved to the next cone and started on that group’s circuit.  They continued to rotate around until they had completed all four circuits sets.  I rewarded them for working hard about halfway through by dropping the intervals to 30 seconds (they were getting tired!)

What made it great:

The kids loved writing their own circuits!   They were so proud of them and worked harder.

And they really did work super hard!  I’m not sure if it was the ownership that did it, but even my hardest to motivate put in a full effort.

Using a timer instead of a set number of reps allowed students to work at their own level and pace.

Easy!  I didn’t have to spend hours writing up exercises, cutting, laminating, etc.

Good for promoting teamwork.  I put the “warm-up captain” in charge and they love having a job to do.

As my students left class, they were commenting on how much fun it was and asking if we could do it again.  I love it when fitness turns fun!

We use cookies on our website to give you the most relevant experience by remembering your preferences and repeat visits. By clicking “Accept All”, you consent to the use of ALL the cookies. However, you may visit "Cookie Settings" to provide a controlled consent.
Cookie SettingsAccept All
Manage consent

This website uses cookies to improve your experience while you navigate through the website. Out of these, the cookies that are categorized as necessary are stored on your browser as they are essential for the working of basic functionalities of the website. We also use third-party cookies that help us analyze and understand how you use this website. These cookies will be stored in your browser only with your consent. You also have the option to opt-out of these cookies. But opting out of some of these cookies may affect your browsing experience.
Necessary Always Enabled
Necessary cookies are absolutely essential for the website to function properly. These cookies ensure basic functionalities and security features of the website, anonymously.
Functional
Functional cookies help to perform certain functionalities like sharing the content of the website on social media platforms, collect feedbacks, and other third-party features.
Performance
Performance cookies are used to understand and analyze the key performance indexes of the website which helps in delivering a better user experience for the visitors.
Analytics
Analytical cookies are used to understand how visitors interact with the website. These cookies help provide information on metrics the number of visitors, bounce rate, traffic source, etc.
Advertisement
Advertisement cookies are used to provide visitors with relevant ads and marketing campaigns. These cookies track visitors across websites and collect information to provide customized ads.
Others
Other uncategorized cookies are those that are being analyzed and have not been classified into a category as yet.
SAVE & ACCEPT