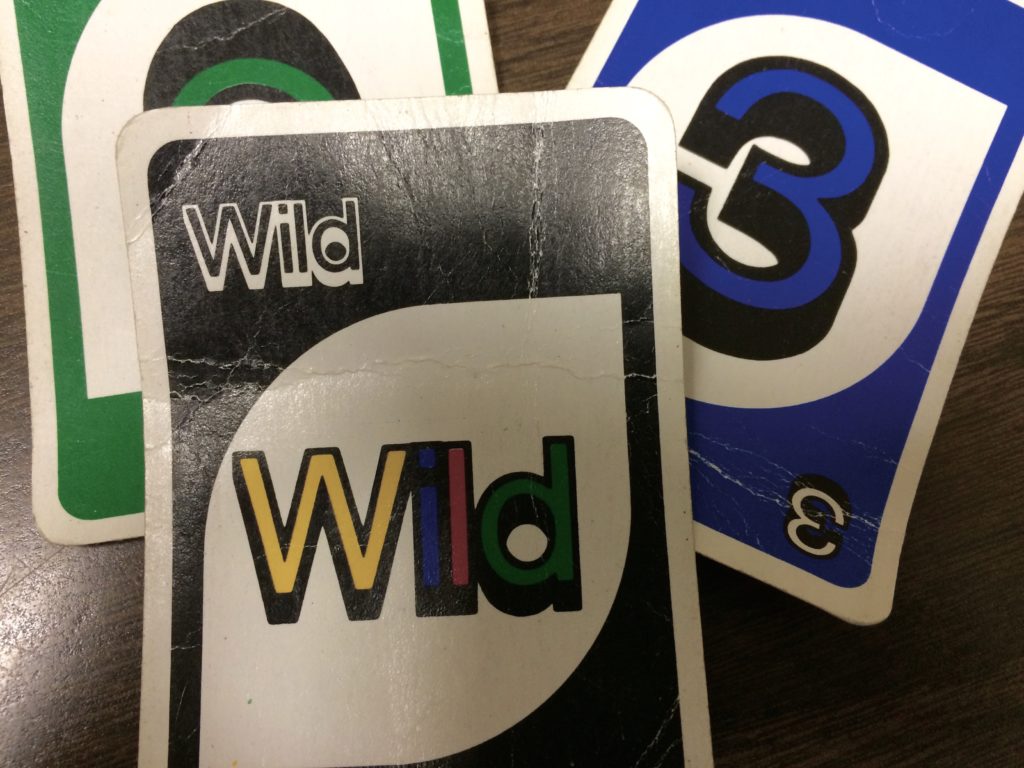 My youngest classes love dancing and moving to music.  I use music on a daily basis to add energy and enthusiasm.  Here is a fun and easy game that is great for a quick warm-up, time filler, or even a small space activity.

I use UNO cards, but any type of cards would do.  Assign each color a movement.  We did:

Pass each student a card and have them move into their own space.  When the music starts they do the movement assigned to their card color.  When the music stops, they freeze.  I then call out “trade” and they trade cards for a new color.  Repeat.

I used this during the first week of school to practice freezing on signal.  I made sure they were quiet and looking at me before we traded again. This made it a fun way to practice my rule of freezing when the music stops.  My 1st and 2nd graders loved it!

Do any of you PE teachers out there ever get kicked out of your gym?  Or are you a classroom teacher looking for ways to get your class moving and release some energy.  We had an assembly at our school today.  Every time we have an assembly, I lose my gym and have to teach PE in the classroom.  Here is what I did today with my 3rd grade class when I found out last minute that I did not have a gym.

I set up 6 cones around the room and told the students to find a cone to sit next to (limit 5 people per cone).  I didn’t move any desks, just put them anywhere there was a few feet of space!  I told the groups to quickly decide who in their group would go first, then have that person stand up.  (one group couldn’t make the decision peacefully so I made it for them)  I had 6 groups so I put 6 dice on one of the desks.  The lead person from each group came to the desk and rolled a die then went back to their group and told them the number they had rolled.  I wrote an activity on the whiteboard (jumping jacks).  The group had to do the number of jumping jacks to match their die roll.  I have dice that number 1-20.  Once all groups were done, we repeated with  new students rolling the dice and a new activity on the board.  I mixed in some math such as multiply your number by 10 and hold a plank for that many seconds.  Repeat until everyone has had a turn to roll the dice.

After our warm-up game I had them return to their desks and told them I would give them something if they were sitting quietly (good way to calm them back down to listen to new instructions).  I passed out 3 small round marker tokens to each of them.  This is an easy game.  The students walk around and challenge each other to Rock Paper Scissors.  The loser has to give the winner one of his/her tokens.  If they run out of tokens, they come to me and I give them a task to earn a new one such as “do 25 jumping jacks”.  The game can go on as long as you allow it.  Then count tokens and declare a winner if wanted.

That’s it!  30 minutes of small space activity with little equipment needed.  My class loved both activities.  I’ve tried both of these activities with grades 1-5 and had great success.